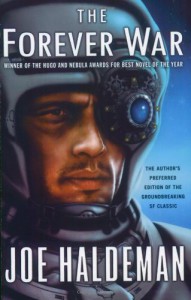 Sci-fi military at it's best about.

A senseless war that lasts centuries due to time dilation of space travel at light speed and beyond. This time dilation makes for some interesting times when soldiers return as for them only months have passed while on Earth years have passed. It also makes for interesting times in battle as the earth forces can never know whether the Tuarans they are fighting are old tech or future tech.
Tweet